A few days ago, I was reading someone's comments on a Facebook friend's wall. That person asserted that as an athiest, her highest aim in life was not some god, but LOVE. She lived her life knowing that she loved everyone. (I wanted to compliment her on her perfection, but I didn't want to start a fight. I also wanted to say something, but really didn't have time to "chat." Not to mention that I wasn't exactly sure how I wanted to say what I was thinking, because usually my thoughts are so disorganized that even I don't understand myself most of the time.)

This morning I read the following from Richard Wurmbrand's 100 Prison Meditations: Cries of Truth from Behind the Iron Curtain.  The part I wish I could have shared on my friend's FB wall is the highlighted portion.

Where and What is God? (Meditation 37)


As creatures of the earth, we think of God as being on high, declaring, “His glory [is] above the heavens” (Psalm 113:4), while the heavenly beings think of Him as being below, declaring, “Let Your glory be above all the earth” (Psalm 57:5).


Both have limited vision. God is outside of space. The One who is all in all cannot have a certain place to dwell, to the exclusion of other places. Therefore Christ, who is God, says, “Foxes have holds and birds of the air have nests, but the Son of man has nowhere to lay His head” (Matthew 8:20). If He were limited to space, He would not belong to the Godhead.


God occupies no place anywhere. As Creator of the Universe, He existed before there was such a thing as place. Space is required by material objects, but not by thoughts, ideals, and desires, which do not rest in a point fixed by geographical coordinates. God is Spirit, not a material object that must exist somewhere. When the Bible says that He is in heaven, it is to indicate His elevation. God dwells in Israel, in Zion, in His church: such things are said for the purpose of giving honor to an institution or a people. But these assertions in the Bible are never exclusive – they do not limit God. They do not mean that He is in Zion, but not in Britain; in church, but not in a factory.


Nor can time be applied to God. The biblical Hebrew has no tenses to indicate time; you cannot say that things have been or are or will be. You enter the sphere of divinity, of timelessness. The Hebrew verb has only two fundamental categories, the perfect and the imperfect. Oseh means “in the process of being done.” Asah indicates completed action. Biblical Greek also has a verb form called Aorist, which literally translated means “without horizon.” God created the universe, which has time as one of its attributes, but He and His people are timeless. He was when there was no time. He will be when “there should be time no longer” (Revelation 10:6, KJV).


God is called Father and King because we humans associate these titles with our concept of esteem. He did not procreate us a father did. He did not become king by inheritance or conquest as other kings do. He is above all that we can say in human words.


When David Livingstone went to the cannibals in Africa, he wished to teach them “God is love,” but they did not have the word “love.” So he asked them what was the best thing they knew. They replied, “Unboi,” which is the smoked meat from the arm of a man. So Livingstone preached, “God is the best unboi.” He was criticized for this, but wrongly. God is not unboi, it is true, but neither is He love. Love is a sentiment shared by humans and superior animals. But is God merely a human sentiment? Because love was the highest thing the Greeks knew, John said, “God is love,” just as Livingstone said, “God is unboi,” for those who knew no better.


There are no human words and categories to indicate how and where God is. Whenever attributes are applied to God, they are what are called “anthropomorphisms,” likenesses from human life that are used to tell something about Him. We are limited in our thoughts and words about God, but let us know that, beyond all our limitations, He is.
Posted by Becky at 4:13 PM No comments:

My daughter Ai introduced me to The Piano Guys. She played cello in her high school strings club, and she often would watch their youtubes. Their music alone is perfect, but the videos they make are really fun, too. This one has some fun blooper segments at the end.

New Year's Resolutions? No, Thank You!

I gave up on making New Year's resolutions a long time ago. There's just too much going on at this time of year. Making up some goal about how I was going to improve and change myself never seemed true. And this year, I thought I would continue my bold tradition. Afterall, whenever I've made a resolution on January 1st, it'd be broken before the 2nd arrived. Pretty much.

Then, I went out and bought a scale. The one we have is not very accurate, and it's getting rusty and ugly. So, I decided it was time to face the music. I had just finished reading Eat to Live by Dr. Joel Fuhrman, and I was shocked to read that my ideal weight was about 40 pounds less than what I now weigh! I have to do something about that. I still haven't figured out how to use the scale, though. It measures more than your weight, and I have to read the manual (in Japanese, of course) to know how to input my data. Then when I stand on the scale I'll find out how much I weigh, how much fat I have, and how much (little?) muscle, and perhaps a few other things. I probably don't want to know, but when I was reading in Eat to Live, I was reminded how eating more nutrient rich foods is much better for you. I used to be quite careful about eating foods in as close to their natural state as possible, but I've really gotten lazy in the past 5 years or so. It shows.

So, I suppose that means I DO have a New Year's resolution, doesn't it? And so, yesterday, I decided would be a good day to stop saying, "Tomorrow, I'll begin." I've never smoked cigarettes, (so I don't know what it's like to quit smoking), but my first day of no coffee... YUCK! Actually, I don't know if it was the not having coffee that made me feel so awful, or if I was coming down with a bug anyway and it just happened to conincide with the day I started this new experiment. Anyway, I had headache like one I've never had before. I ate something in order to take an aspirin, and as soon as I swallowed it, everything came back up. So, yesterday's start didn't go as planned, but I guess you could say my stomach was kind of detoxed.

Today went better. I forced myself to get up at a decent hour, made a simple breakfast for me and my husband. (Two of the three kids were sick and not in the mood for breakfast, and the third kid just kept on sleeping.) And as I puttered around the house doing light work, I thought of two more New Year's resolutions. Yes, I did.

Clean kitchen sink. Clean kitchen table. Every day. If you know about Flylady, you're already familiar with her clean kitchen sink concept. We'll see how it goes. If I can convince (coerce?) my kids to NOT put their used dishes and cups in the sink and just walk away, I will not be much of a grump when I get into the kitchen to do meal preparations. And if I can keep the kitchen table cleared of all the junk that gets put there, it will be a much more pleasant eating experience. So, that was today's mission, and I did it! Now, I have to announce it to my family.

I wonder if I should teach them the saying, "If momma ain't happy, nobody's happy." Nah, that'd be too much like manipulation, wouldn't it?

Merry Christmas and Happy New Year
from my family to you and yours! 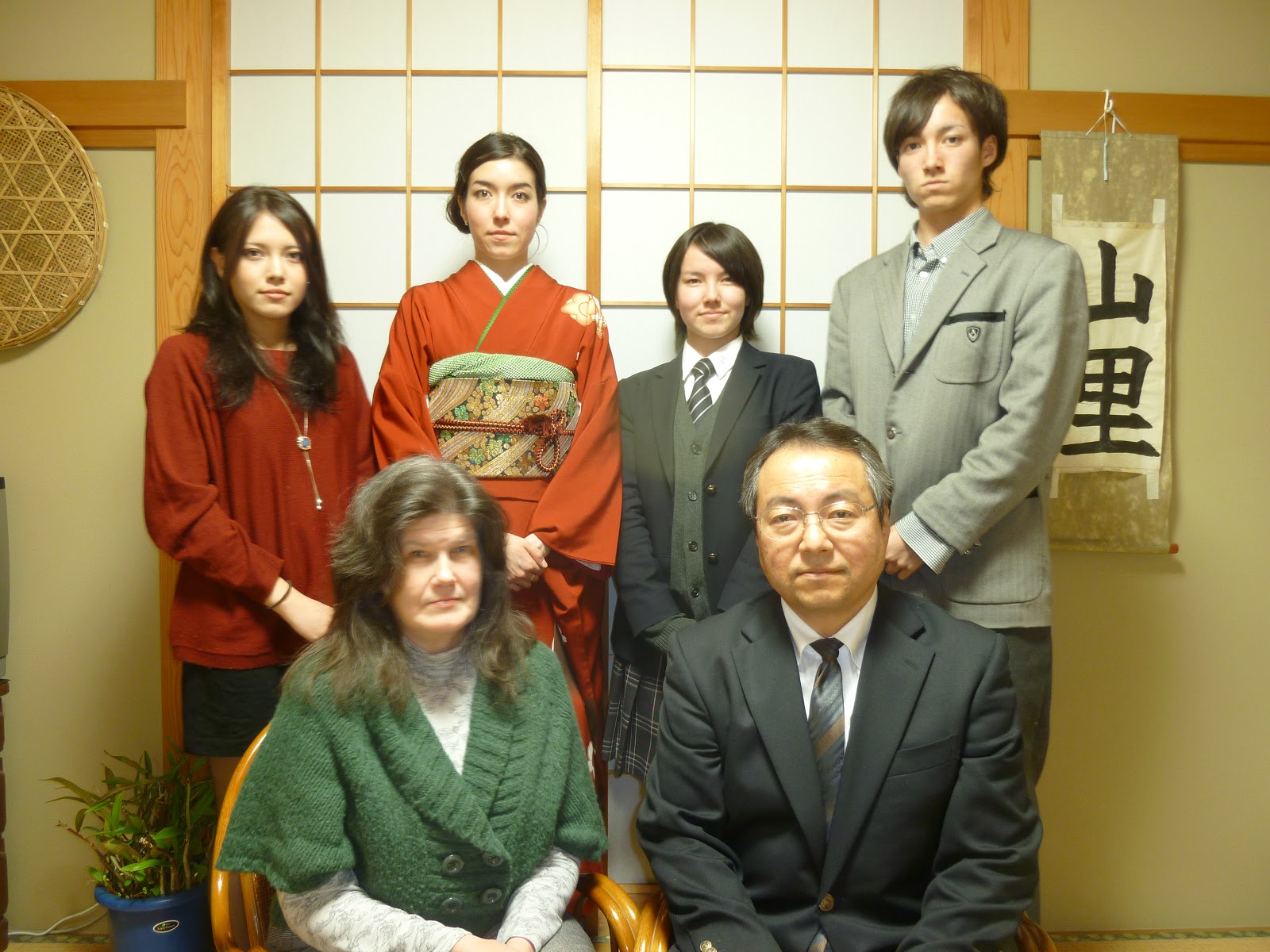 Becky
Every once in a while you need to rearrange the room. But, the room itself and the stuff in it remain the same.